On the tireless initiative of the later dean Gerhard Fischer, a hospital was built here in 1892 and opened in 1895, which was named "Gerhardus House" in his honour. From the first beginnings, a sewing school, a kindergarten and a nursing home for the mentally ill and a children's recreation home have also developed from the management by the Sisters of the Poor Franciscan Sisters. 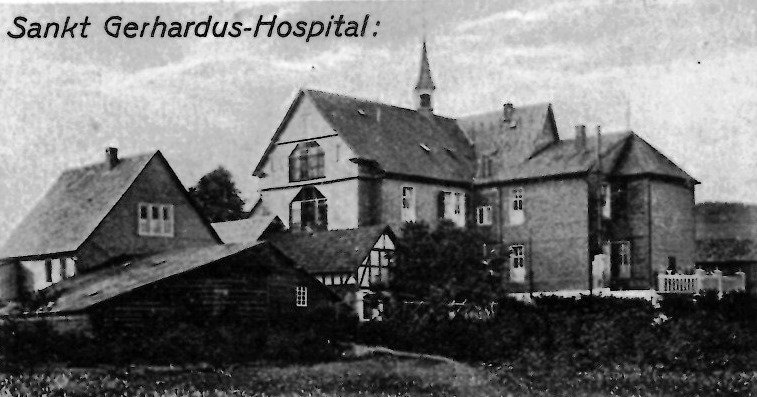 Dean Fischer donated the hospital to the Catholic parish of Drolshagen, which passed the house and its grounds on to the "Poor Franciscan Sisters of Olpe" as a religious order in 1895. The nuns not only looked after the in-patients but also the sick and residents in need of care in the district of Drolshagen. A sewing school was quickly established and from 1908 a kindergarten. In 1910, the Josefshaus was built to accommodate mentally ill patients. During both World Wars, the facility served as a reserve or field hospital. During World War II, over 1,400 wounded soldiers were cared for here and an additional 1,500 civilian patients. After the end of the war, the Josefshaus was set up as a children's home, and hundreds of children from the bombed-out cities of West Germany recovered here for several weeks. In 1964, a residential home was set up for sick and elderly nuns, but the hospital closed its doors in 1967 - much to the regret of the people of Drolshagen. Afterwards, extensive structural changes were made and a home for the elderly was built, where today more than 100 elderly people are cared for, which was later joined by a residential complex with 36 flats suitable for the elderly.